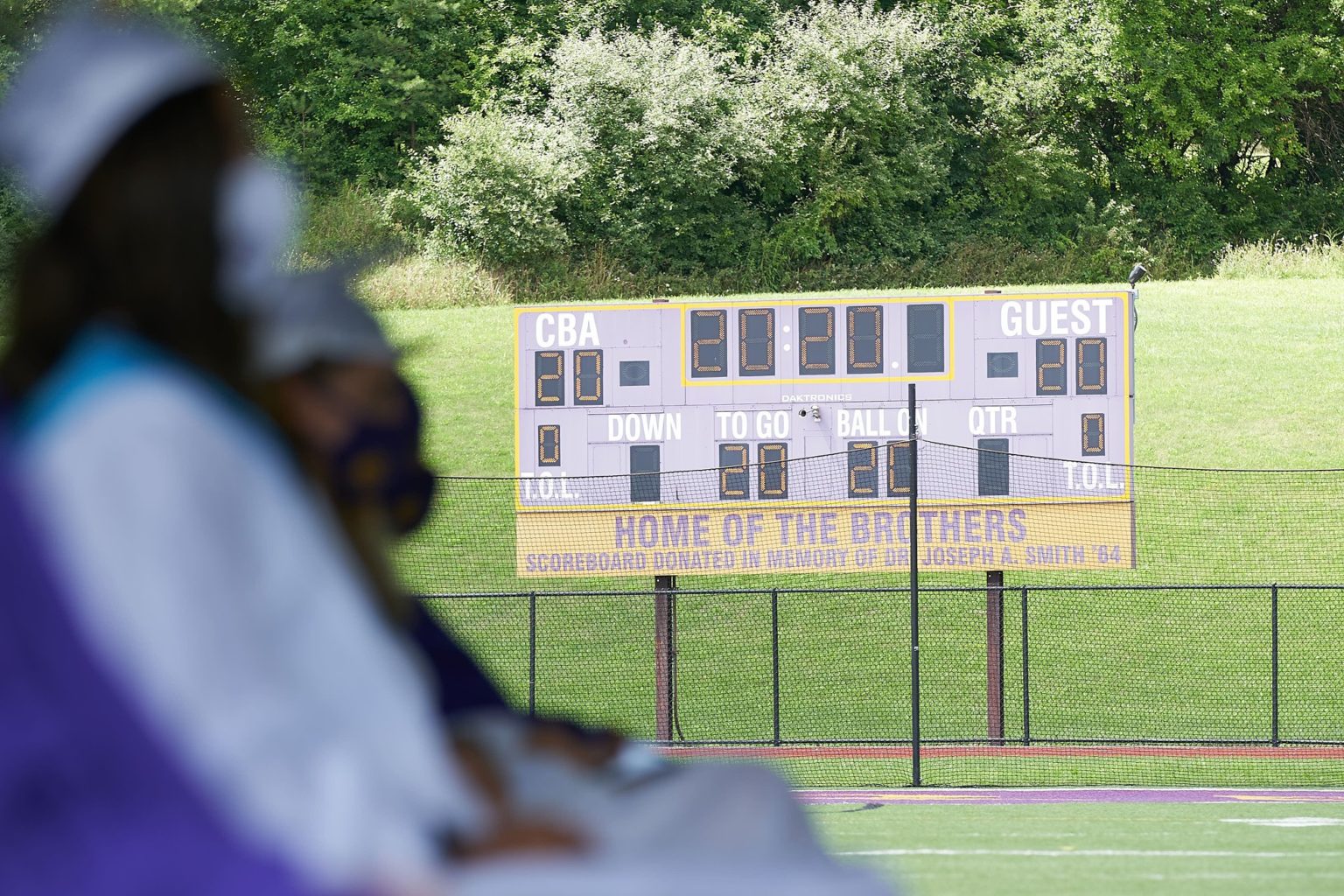 Before we turn the page to new beginnings for the new year of 2021, let’s take a look back at some of the highlights at CBA in 2020.

Wleklinski ’75 Nets No. 500-John “Buddy” Wleklinski ’75 added another milestone to his incredible coaching resume’ on Jan. 11. The Brothers knocked off Solvay, 67-47 to give Coach “W” as his players refer to him, win No. 500. Wleklinski, who started coaching the boys varsity team in 1984, joined six other CNY coaches to accomplish this feat.

Catholic Schools Week Celebration-After a week of mid-term exams, students kicked off the new semester on Jan. 27 by celebrating Catholic Schools Week. The weeklong celebration included a Mass, a walking tour through the new alumni hall, a Service Fair, and a Multicultural Assembly. The Parents Club celebrated academic excellence by giving each student a cookiewich during lunch.

Ribbon Cutting Ceremony For New Learning Commons-Trustees, alumni, students, faculty, staff and friends of CBA gathered on Wednesday, March 11 for a ribbon cutting ceremony for the new Learning Commons. The Learning Commons was part of CBA’s Capital Campaign Our Mission, Their Future. Features of the new learning commons: Technology integration in the instructional areas featuring 40 Chromebooks for student usage; video and audio conferencing, and dual 83-inch presentation monitors; collaborative work/study spaces with shareable presentation monitors at each station; conference room for student use; video and audio production studio with a green screen.

Distance Doesn’t Stop Brothers From Being Connected-  CBA certainly remained connected through the pandemic by daily prayer, learning, and the digital world. Each morning senior Matthew Doane (along with his younger siblings) delivered the prayer. The prayer was written by various students and videoed by senior Janelle Little. CBA teachers stepped outside of the box, and continued to offer a quality education, by coming up with unique lesson plans. Physical Education teacher Bob Bewley taught his students how to juggle, while science teacher Luke Ribaudo took his students on a virtual field trip. 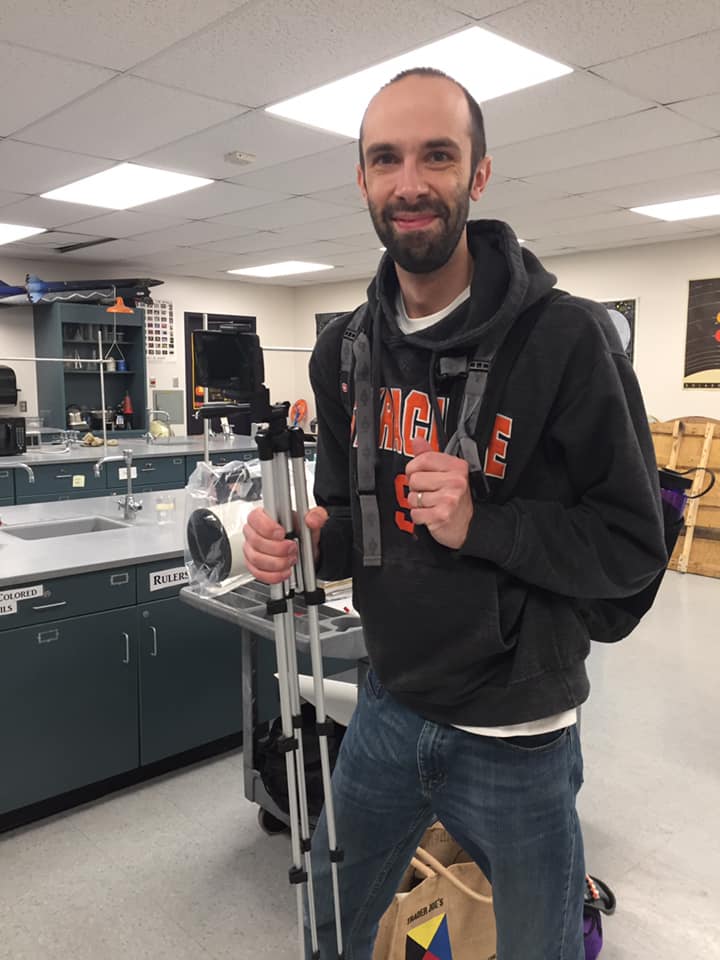 Spreading Positive Thoughts And Gratitude-Sophomore Delaney Hayden launched a positivity and gratitude challenge.  “The Whose Shoes Mile Challenge” asked people to walk, run, bike, swim, roll (if in a wheelchair or any other device with wheels), drive, or do anything they are capable of doing for a mile and to dedicate that mile to anyone who they want to thank for being heroes, and going the extra mile during the COVID-19 pandemic.

Drive-In College Decision Day-CBA welcomed members of the Class of 2020 to a Drive-In College Decision Day Celebration on May 1. Seniors, dressed in their college choice t-shirts, and their families, pulled up in front of the school, as administration and teachers applauded each senior as they got out of their cars to take a photo and receive a “B” magnet, and a cookiewich.

Drive-In, Drive Thru Senior Night Approximately 100 seniors and their families attended a Drive-In, Drive Thru Senior Night on May 16.  The students and their families watched the Senior Video produced by Janelle Little ’20 on a movie screen in the parking lot. They then drove up to the stadium and got out of their cars one at a time, to pick up their yearbooks, and take photos with coaches and Fine Arts faculty members.

Lucas Valedictorian; Tran Salutatorian-Principal Matt Keough, Assistant Principal for Academics Steve Garraffo and Counselors Kathleen Hanson and Chris Dopkowski made a surprise visit to the homes of Elizabeth Lucas and Thienan Tran on May 22 to announce that they were named the Valedictorian and Salutatorian, respectively of the Class of 2020.

Major Lasallian Educator Of The Year-Susan Major was awarded the Lasallian Educator of the Year for the 2019-2020 school year. Major, who has spent the last 10 years at CBA teaching both Religion and English, was nominated by her colleagues.

Saba Announces Retirement-Vivanne Saba, who joined the CBA family in September of 1991, retired. Saba taught all levels of Spanish from 8th grade through the Advanced Placement courses. She earned her Bachelor of Arts degree in Secondary Education from SUNY at Cortland and completed graduate studies in Spanish from Syracuse University, and graduate studies in French from the University of Neuchatel in Neuchatel, Switzerland.

Keough Assumes President’s Role-Matt Keough, who has been CBA’s Principal since 2015, assumed the role of President of the school on July 1. Keough succeeds Brother Joseph Jozwiak, FSC, who continues at CBA, as a Special Advisor to the President.

Celebrating The Class of 2020-CBA celebrated the Class of 2020 on July 30 and 31. Members of the senior class (five at a time) displayed their college destinations with the traditional chalking the walk in front of the school on Thursday.  A class-wide graduation ceremony and Founder’s Day recognition took place on Friday.  The senior class graduation poem, reflections by Valedictorian Lizzie Lucas and Salutatorian Thienan Tran, Founder’s Day talk from President Keough, and the singing of the CBA Alma Mater highlighted the event. President Keough surprised the class by donating the bench that sits in the hallway outside of the office in their honor. 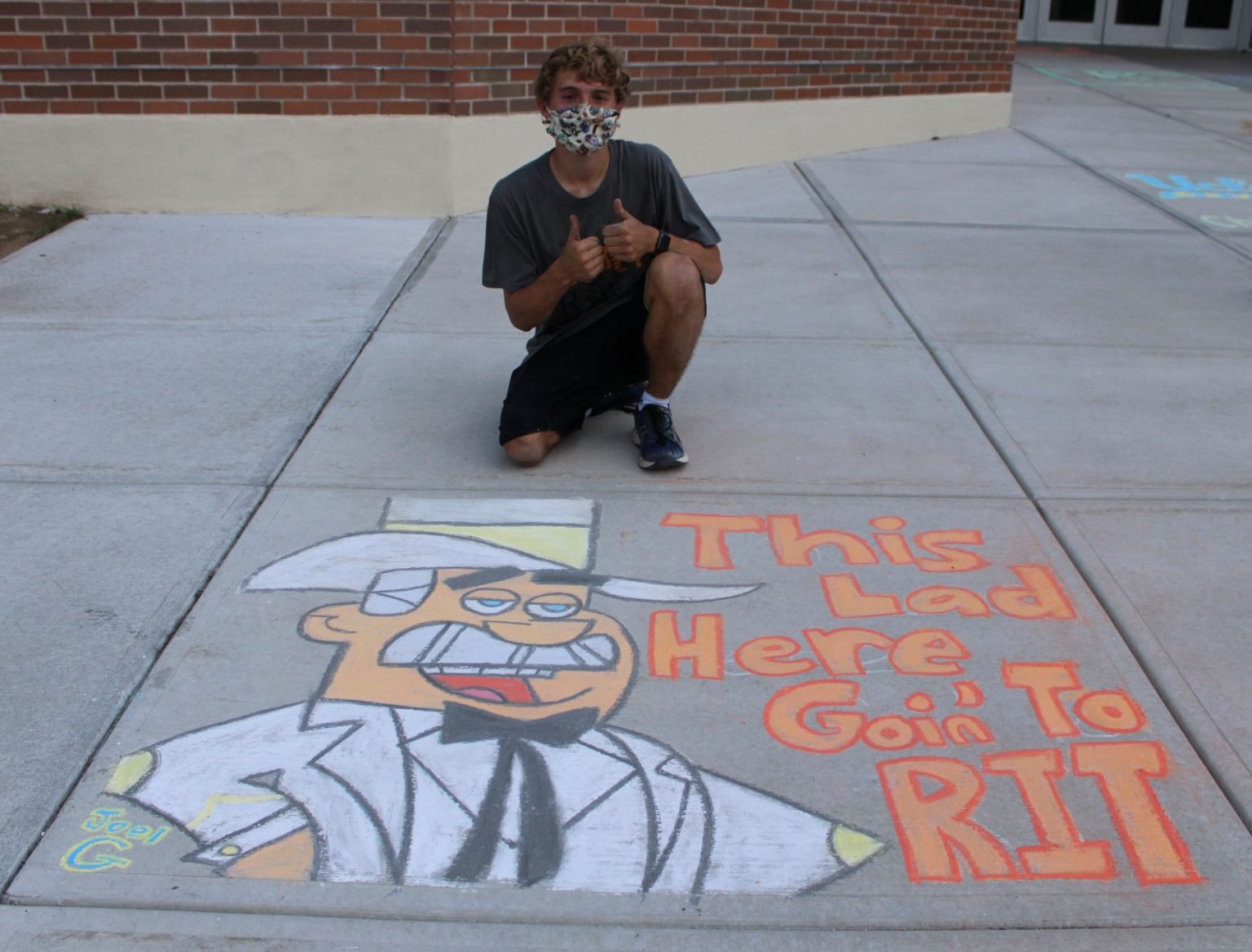 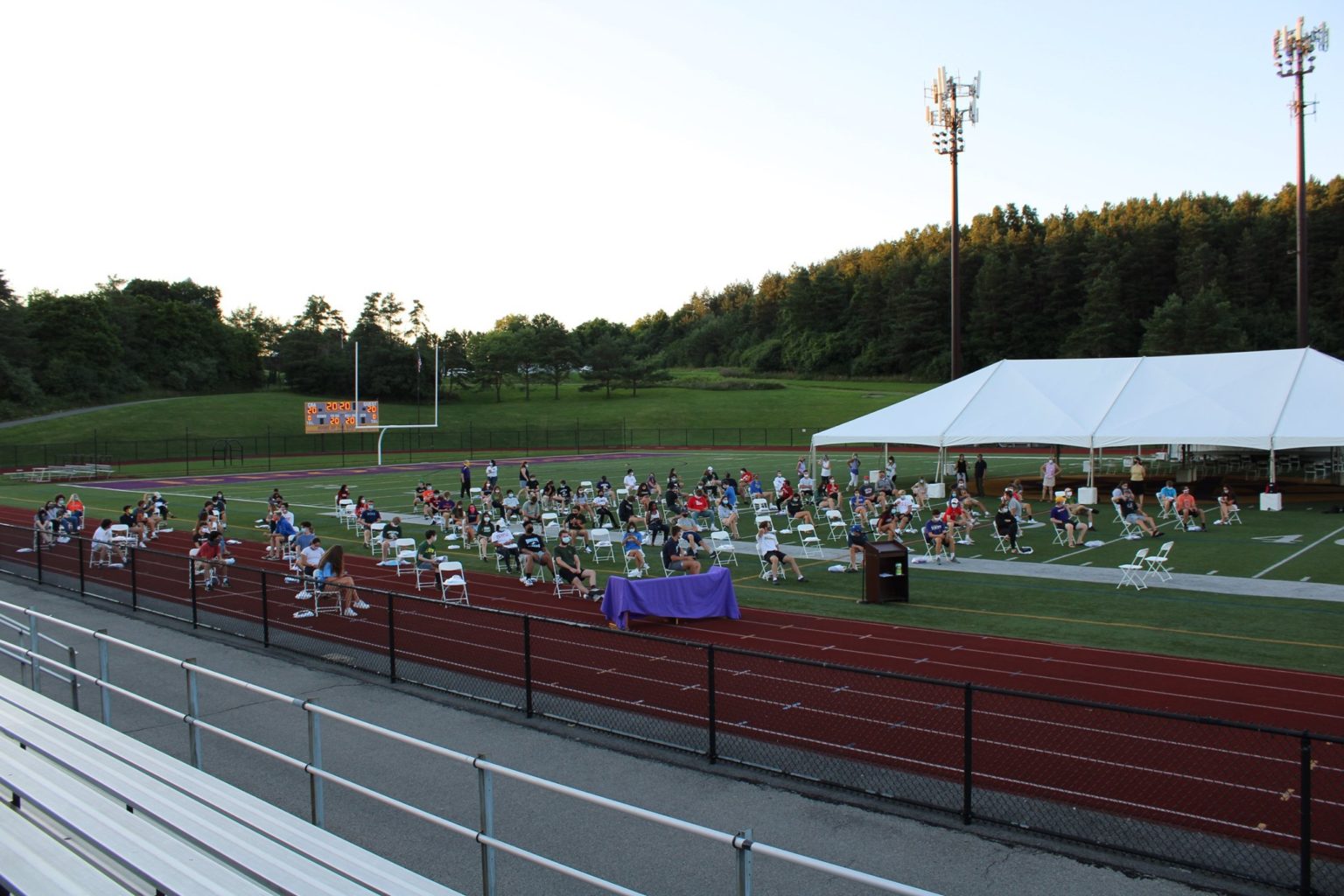 Graduation 2020-Five individual senior homeroom graduation ceremonies were held for the Class of 2020 at Alibrandi Stadium on Aug. 2. Each student received their diplomas and individual award winners were announced. President Matt Keough and Brother Joseph Jozwiak, FSC, Special Advisor to the President, both spoke and congratulated members of the Class of 2020. 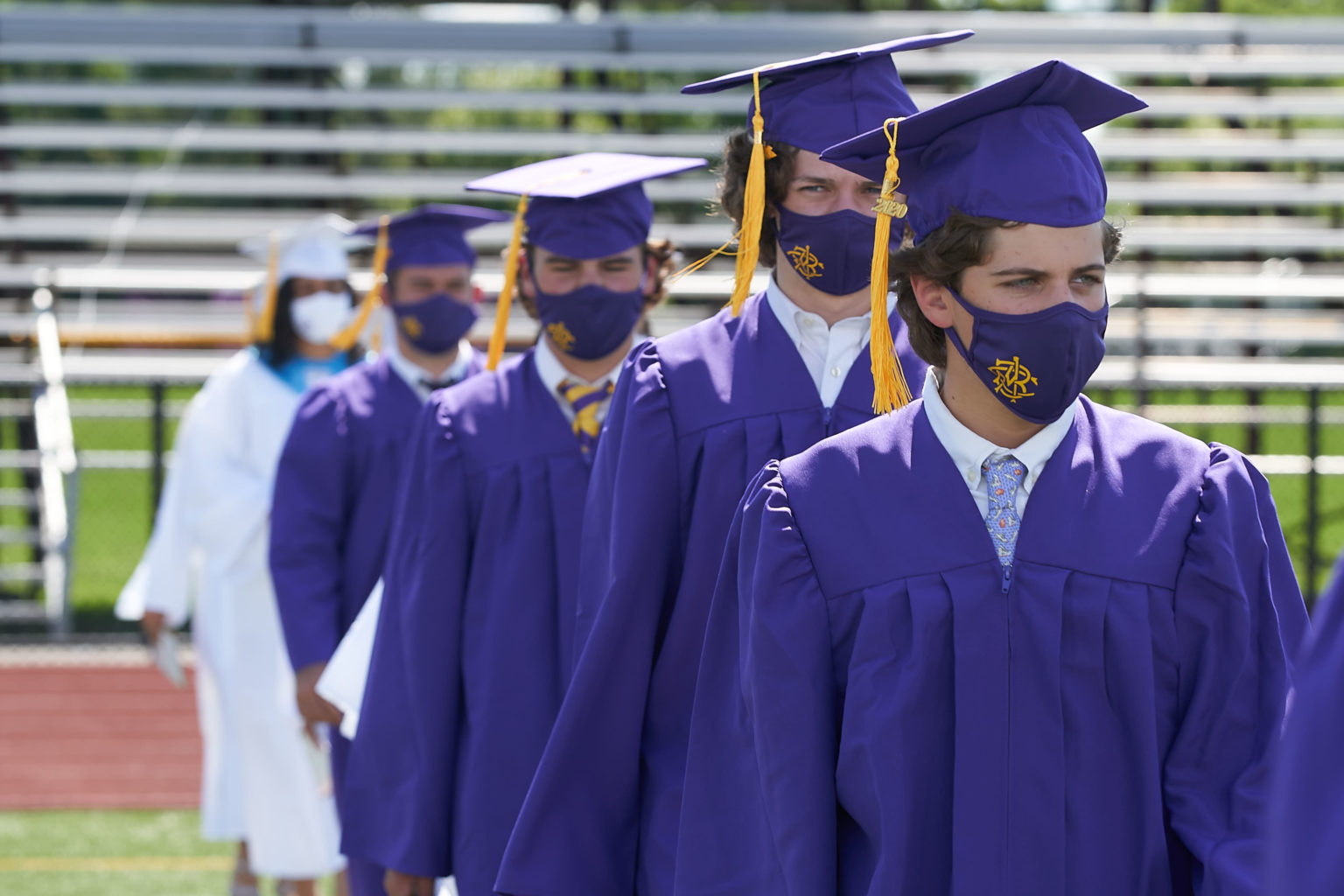 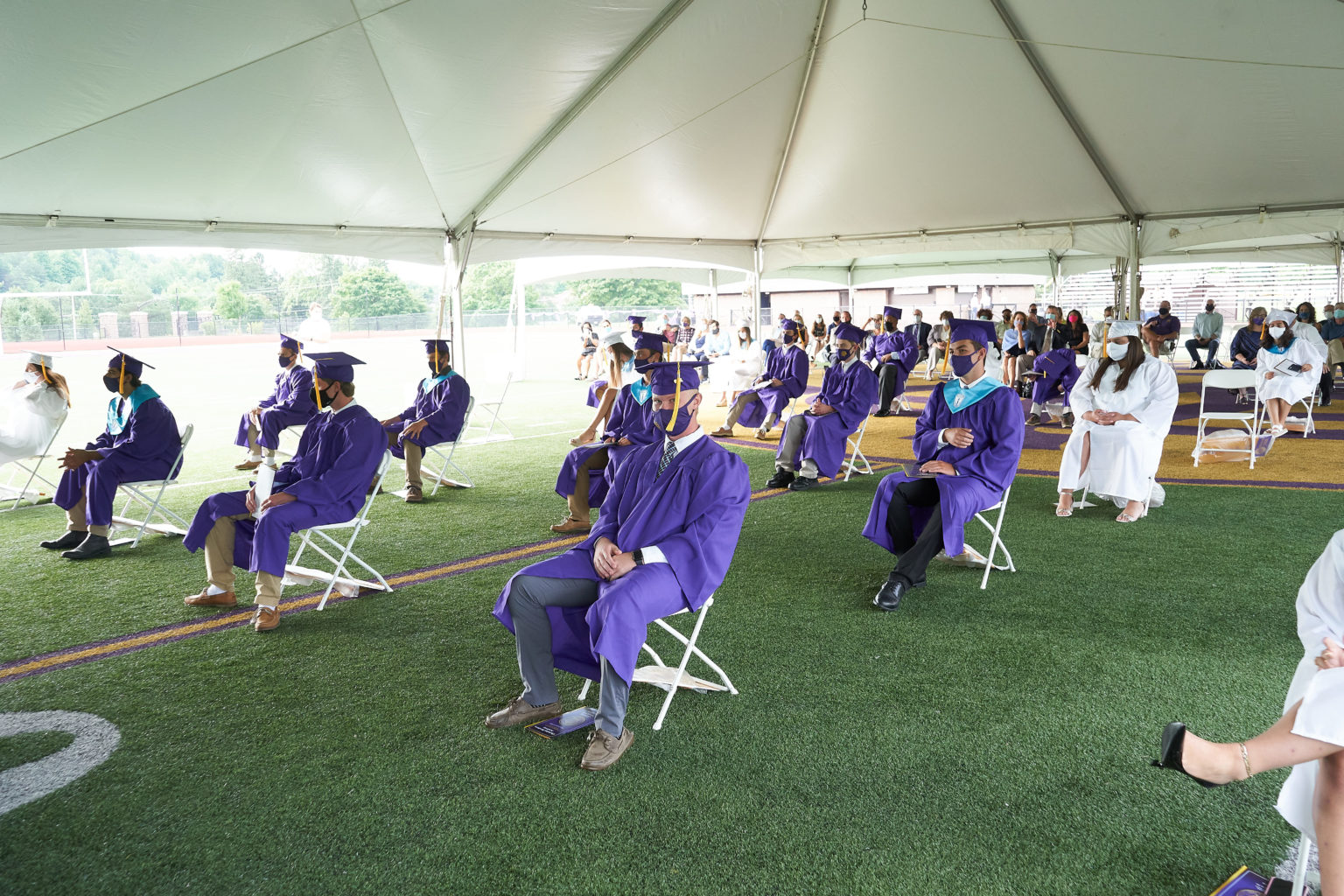 Drop-In Day-Approximately 175 new incoming students attended Drop-In Day on Tuesday, Sept. 8.  Hosted by Sister Suzanne Dunn, Vice Principal for the Junior High and the Counseling and Student Service Office, Drop-In Day gave new students an opportunity to meet current students who were there to greet them, answer questions and give them a tour of the school. 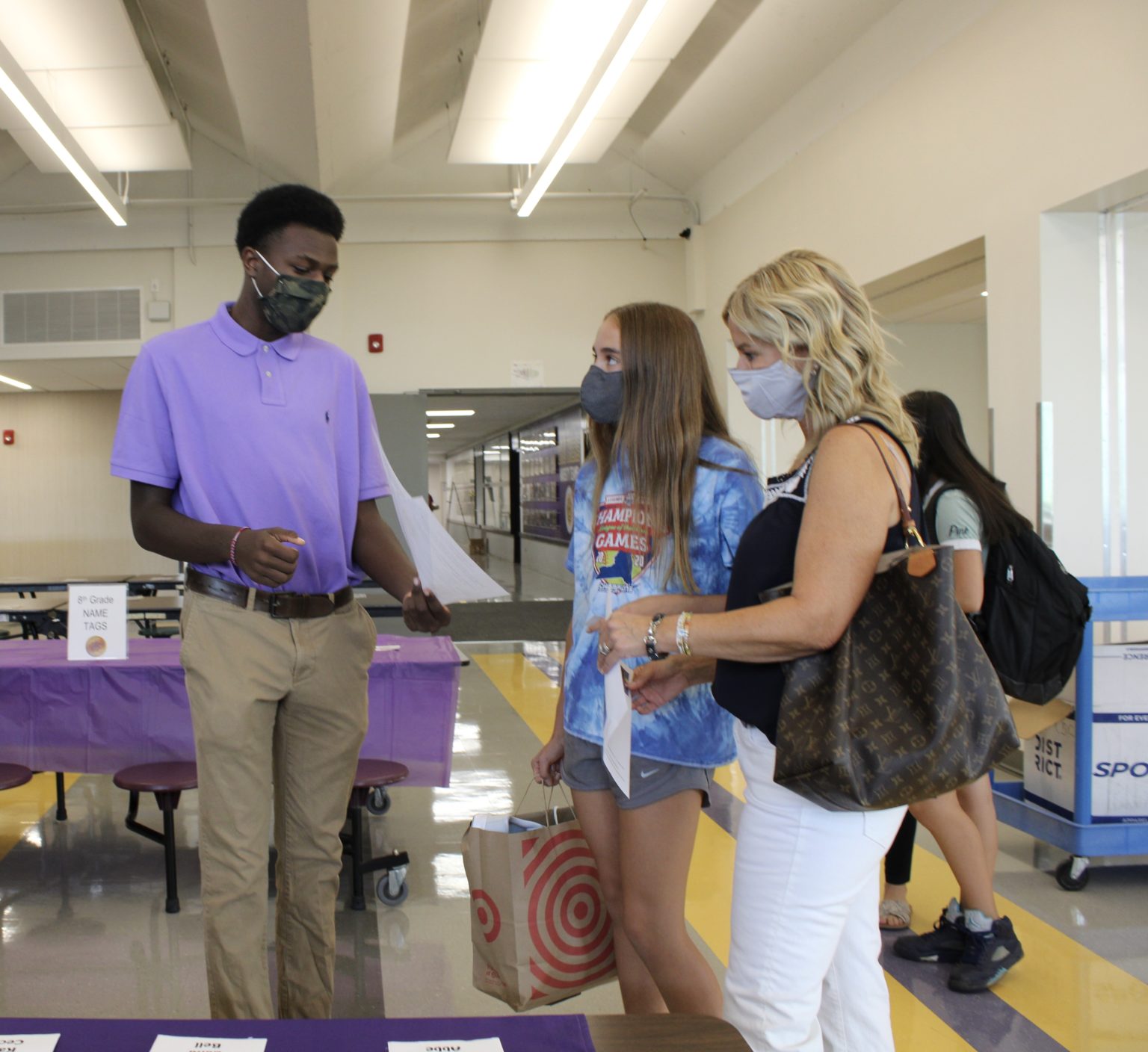 Welcome Back Students-Members of the Class of 2021 gathered at Alibrandi Stadium for prayer, and a welcome address from President Matt Keough and Principal Debbie Brillante on Sept. 11. They participated in relationship building activities and were introduced to their seventh-grade buddies.  The junior high students met with their house members (homerooms), learned about technology, took part in ice breakers, relationship building activities and question and answer sessions. Classes began on Sept. 14. 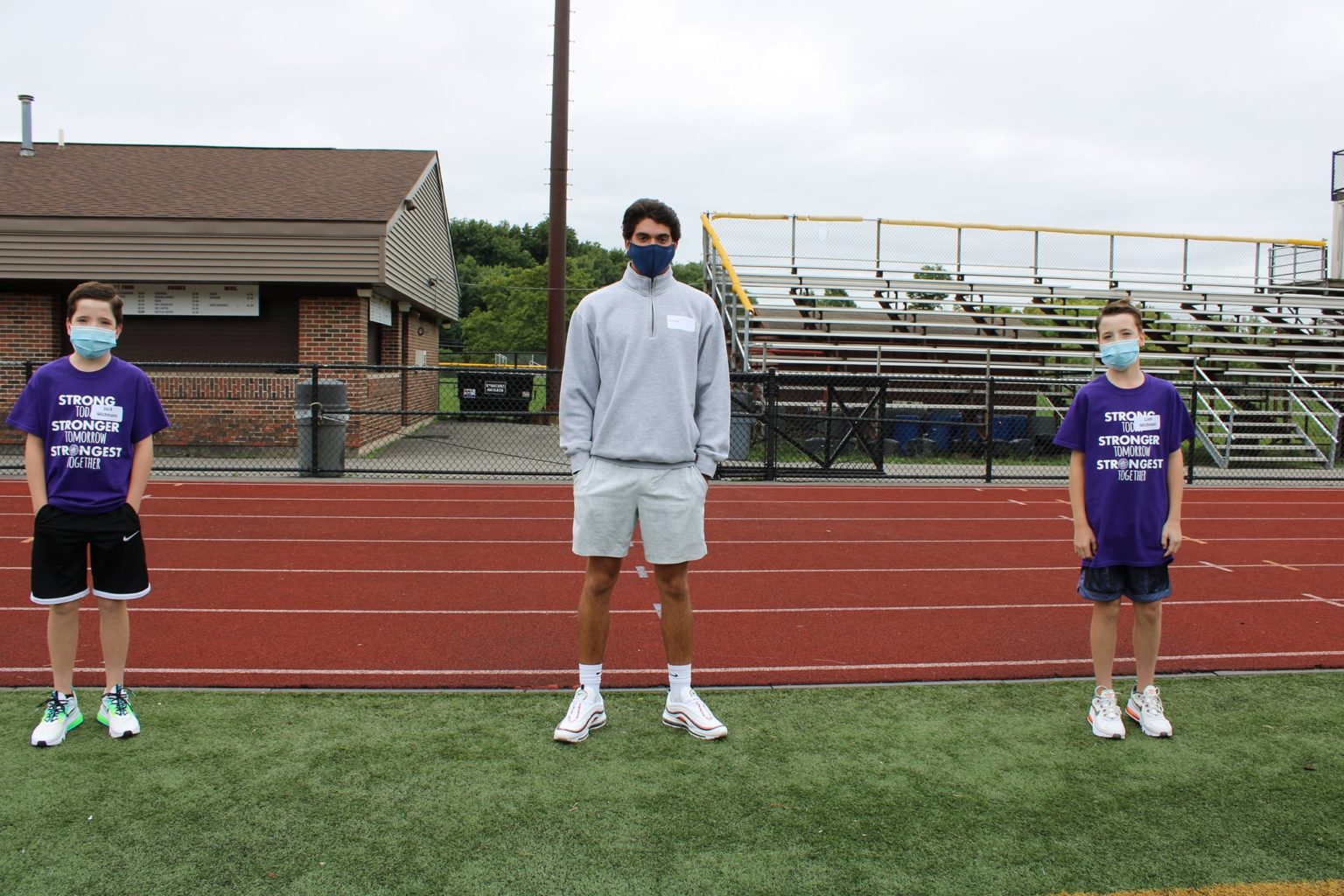 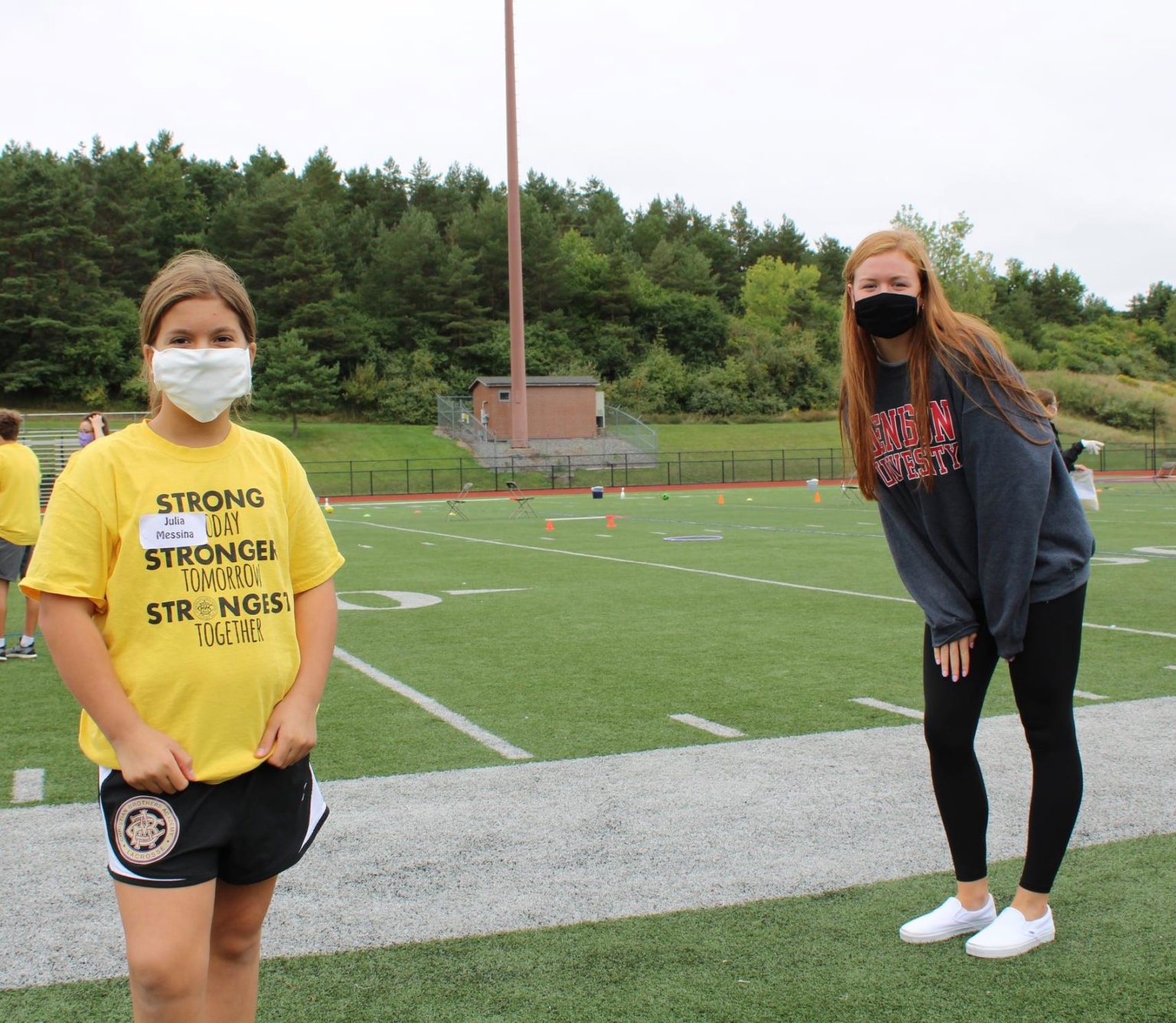 Commended Students-Seniors Rachel Farella, Abigail Greenfield, Michael Heyboer, Thomas Homik, Abby Kambhampaty, Rena Steele, and Darien Tompkins have been named Commended Students in the 2021 National Merit Scholarship Program. The seven CBA students are among the approximately 34,000 Commended Students throughout the nation who are being recognized for their exceptional academic promise.

Brothers For Others-Members of the football program volunteered their time at Joseph’s House for Women on Saturday, Oct. 17. The boys moved furniture, removed beds and air conditioning units, replaced ceiling tiles, and did yard work. 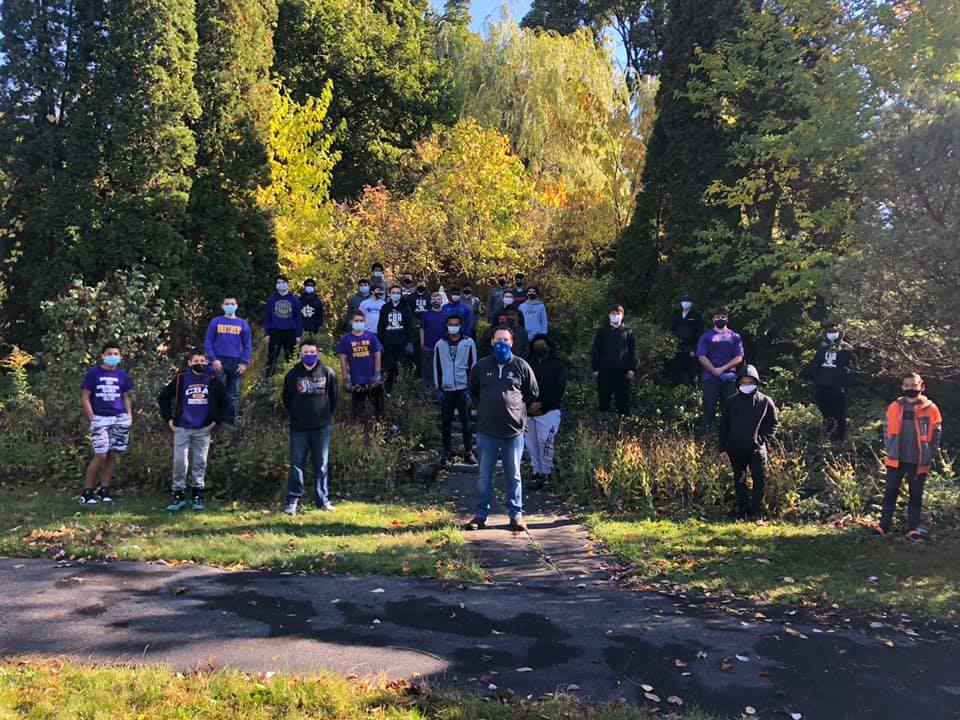 ‘Tis The Season-Students, faculty and staff were so generous donating items for the annual Christmas Drive, which this year benefitted children and their families at the Emmaus Ministry and the Northside CYO. Forty-seven families (153 children) received gifts at Emmaus. 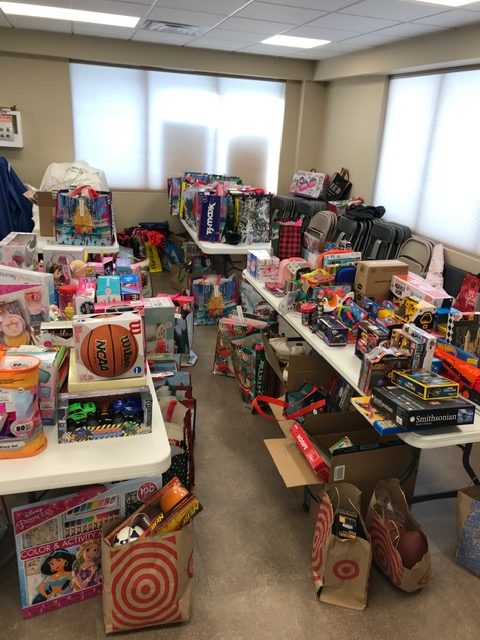 Sounds of The Season-CBA’s talented musicians showcased their talents in an Advent Assembly, shown to the community on Dec. 21 and 22 and in a virtual Winter Concert.